By noomi [dot] egan [at] fsi [dot] lu [dot] se (Noomi Egan) - published 13 January 2021
The image of what constitutes nature in urban environments, and how it is valued, needs to be broadened, according to researchers Sanna Stålhammar and Ebba Brink. Photo: Ebba Brink.

Rich in animals and plants, a refuge to calm anxiety, and a source of new energy. A place for recreation and cultivation. This is how residents of Rio de Janeiro’s largest favela describe their natural surroundings in interviews. It is a narrative seldom brought to the fore, and one that stands in stark contrast to the common description of favelas as hectic and dangerous places. With their new study, researchers Sanna Stålhammar and Ebba Brink want to nuance the image of urban nature and highlight the need to make urban green space planning more inclusive.

– More voices and perspectives are needed in discussions about how nature and infrastructure in megacities like Rio de Janeiro should be managed, preserved, and developed. The image of what constitutes nature in urban environments, and how it is valued, needs to be broadened, says Sanna Stålhammar, who defended her dissertation in 2020 at LUCSUS, Lund University Centre for Sustainability Studies.

In the study, published in the journal of Urban Ecosystems, Sanna Stålhammar along with LUCSUS postdoctoral researcher Ebba Brink interviewed residents living in Rocinha, Rio de Janeiro's largest favela. Defying any one term such as informal settlements or the pejorative ‘slum’, the favelas are working-class neighborhoods characterised by self-built housing, precarious land rights, low access to public services, and high population density. Rocinha is located on a hillside between the Tijuca forest and some of Rio de Janeiro's richest areas. In focus groups held by the researchers, residents answered questions about what nature means to them, how they view their surroundings, how they use nature, and what problems they link to it. 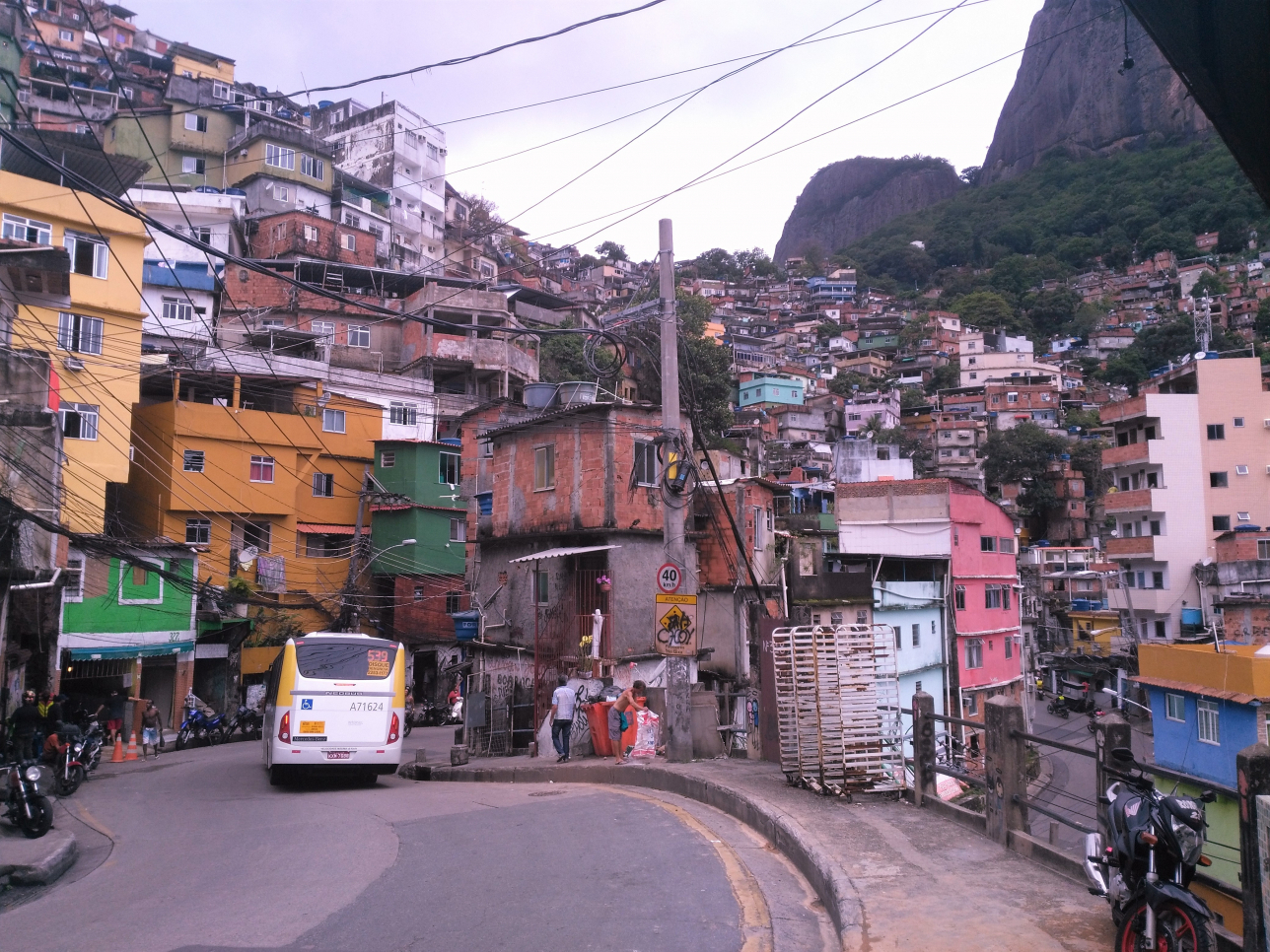 A street in Rocinha, Rio de Janeiro's largest favela. Rocinha is located on a hillside, sandwiched between the Tijuca forest and some of Rio's richest areas. Photo: Sanna Stålhammar.

Nature is an important part of the inhabitants' lives

The results from the interviews paint a more positive picture than the generally widespread perception – that is, the natural environment in the favelas as associated with waste, natural disasters, and violence. Surely, participants remembered healthier and more abundant nature a few decades ago – they highlighted how littering, sewage problems and deforestation have affected the environment negatively. Despite this, local nature was an important part of their lives.

The interviewees described religious, spiritual and emotional experiences linked to spending time in the forest and on the beach. Several interviewees described nature as a force that could cleanse them from worry and pain. Nature provided opportunities for recreation and restoring one’s energies. Some groups described engaging with nature for religious rites and prayer and for collecting medicinal plants. Several residents made the connection between green spaces and benefits such as fresh air and protection against extreme weather, in line with recent urban ecosystem services research. For many people, nature evoked memories of childhood play in the surroundings with friends and family.

– The study shows that the interviewees value their surroundings, even though the favelas are seen in a negative light by many Brazilians. The challenges of everyday life in these areas should not be diminished, but the all-negative image contributes to the exclusion people face, says Ebba Brink.

She notes that many favelas, which once arose as a ‘solution’ to a lack of housing policy and urban planning, are today becoming increasingly organised. Favela associations are mobilizing by sharing and promoting their ongoing work with sustainable solutions, including ecosystem-based methods for managing sewage and floods.

– Positive stories about the favelas become important pieces of the puzzle to show politicians that these areas are a force to be reckoned with, with nature, sustainability innovations and urban culture, says Ebba Brink.

The study explores an alternative to ecosystem services

In the study, Sanna Stålhammar and Ebba Brink explore a new framework that can complement methods for assessing ecosystem services. Ecosystem services refer to benefits that humans obtain from nature that contribute to our survival and quality of life, such as pollination, water, and nature experiences. Recently, other frameworks have been developed that strive to take a more holistic approach to humans’ relationship to nature. One such approach is urban biocultural diversity, which can be used to capture how biological diversity is used and perceived in urban environments where different cultures coexist.

They explain that both frameworks have been developed to facilitate the work of preserving biodiversity and at the same time support urban planning and the development of green spaces and infrastructure.

– It is good that urban planners, nature conservation planners, and researchers can gather around common frameworks, such as for ecosystem services. The problem is that the frameworks are not developed for cities like Rio de Janeiro, and they rarely include a diversity of voices. There is often too much focus on nature as a service, or certain measures of biological diversity, rather than on how we humans interact with nature in different cultural contexts, says Ebba Brink.

In the future, the researchers want to see more inclusive frameworks that can guide urban planning in different parts of the world. Methods should consider that different inhabitants use and perceive nature in different ways. For this to become a reality, more voices and perspectives must be heard, and a variety of needs must be made visible in discussions about how the city's nature should be developed. An example is how to handle invasive species such as the jackfruit tree. While the giant, versatile fruits are popular with Rio de Janeiro’s residents, the city's conservation management view the trees as a problem. Urban areas in cities can also carry negative or traumatic associations for certain groups, such as collective memories of state violence and displacement.

The researchers emphasize that it is a great challenge to include broader groups in green urban planning. Especially in cities like Rio de Janeiro, which have large social and economic inequalities.

– How we understand and measure people’s relationship with nature is the basis for what is considered important to preserve and manage. It is vital to broaden the discussions and challenge established approaches – otherwise we risk excluding already disadvantaged groups. This leads to questions of justice: whose nature do we preserve, and whose needs come first? says Sanna Stålhammar.

At the same time, the researchers warn against a one-sided focus on individuals’ use and preferences of nature:

– We must also understand how broader societal structures, such as urban planning models, may contribute to harming both people and nature, Ebba Brink concludes.

Download the article: Urban biocultural diversity’ as a framework for human–nature interactions: reflections from a Brazilian favela, publicerad i Urban Ecosystems at Springer.com

Read news written from the residents' perspective about the favelas' in Rio de Janeiro at RioOnWatch.org

Sanna Stålhammar is a visiting researcher at Lund University Centre for Sustainability Studies.

Ebba Brink is a postdoctoral researcher at Lund University Centre for Sustainability Studies (LUCSUS). She has a master’s degree in Engineering Mathematics with a focus on Risk Management, and a PhD in Sustainability Science, both from Lund University. Her research is interdisciplinary and focuses on the roles of people and nature in the governance of urban climate risk.

Where the Favela Meets the Forest

Latest news
Link to rss
13 Jan 2021
LUCSUS Seminars 2021
Join our research seminars with LUCSUS researchers and invited guests online every Thursday.
13 Jan 2021
New study reveals diverse relations to nature in Rio’s favelas
With their new study
12 Jan 2021
New research frames loss and damage from climate change as the failure of sustainable development
New research frames loss and damage as the failure of sustainable development.
21 Dec 2020
The climate researchers' wish list for 2021
What changes for the climate do researchers want to see in 2021? Researchers in climate and sustainability list their wishes for the new year.
18 Dec 2020
LUCSUS is part of a EU-project to support and restore marine coastal ecosystems
LUCSUS is part of the four-year EU funded project Marine Coastal Ecosystem Biodiversity and Services in a Changing world.
All news
Share
Share on facebook Share on twitter Share on linkedin
Page manager: noomi [dot] egan [at] fsi [dot] lu [dot] se | 13 Jan 2021

We need new ways of understanding and accounting for how people depend on nature to protect and preserve our environment. Research from Lund University Centre for Sustainability Studies (LUCSUS) strives to diversify ways of measuring and evaluating ecosystem services to take into account people’s pl...
More news