How do you make the regional craft beer industry more sustainable? Through direct collaboration with the sector to create “hyperlocal” solutions say researchers from LUCSUS who are growing hops at a local brewery in Skåne, Sweden. The aim is to test ways to decrease greenhouse gas emissions and contribute to regional, circular economies.

– We are testing different indoor growing alternatives for hops to see if you can grow them here in Sweden, year-round, and in a way that makes beer production more sustainable, climate friendly and local, says Barry Ness, Associate Professor at Lund University Centre for Sustainability Studies, LUCSUS.

Collaboration with a local brewery

Barry Ness, and colleague Darin Wahl, PhD candidate in sustainability science, are collaborating with Brygghuset Finn as part of the international research project, GLOCULL, focused on identifying and testing local solutions to challenges within food, water and energy systems, and to assess whether innovations can be both locally and globally sustainable.

The beer industry worldwide is faced with many sustainability challenges related to resource use and availability, including the impacts of climate change. Consequently, there is a growing interest in sustainability issues among brewers and beer ingredient suppliers, according to the researchers.

We are interested to see how we can work collaboratively to address sustainability issues around energy and water usage, solid waste and wastewater generation, and brewing process emissions, says Darin Wahl. 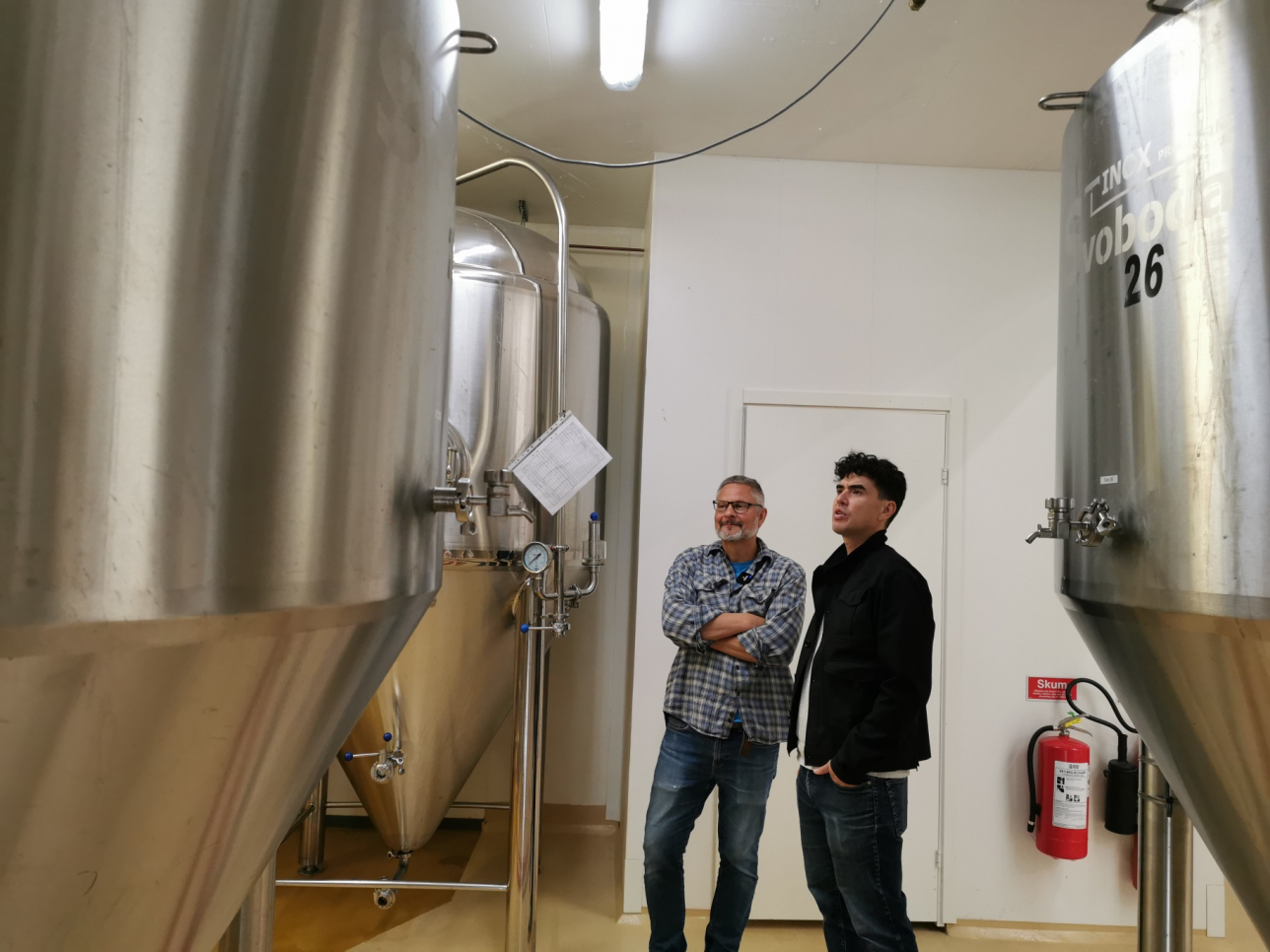 Local and all year-round hop production

As a part of the collaborative process, researchers and Brygghuset Finn’s employees chose to focus on hop production, a key ingredient in craft beer production. Most of the hops used by regional craft brewers are transported great distances from countries such as USA and Germany. Yet in recent years, beer production and the supply of ingredients have been impacted by climate variability, fires, drought, pests, as well as an ever-increasing demand from brewers, who are brewing larger amounts of hop-intensive beers.

– Hops are what give the beer its flavor and character. Craft brewers are very particular about what kind of hops they use. It is all about flavor and consistency. They have to produce the same beer, with the same taste, time and time again. This is a constant challenge for many brewers, says Darin Wahl.

- We get a lot of questions about using Swedish hops, and at the moment, there is not widespread use of local hops due to reasons of supply. We thought it would be really interesting to see if we could grow hops at our own brewery, using some of our waste products as well, says Jamie Robertson, Brygghuset Finn.

Together with Brygghuset Finn, Barry Ness and Darin Wahl have created a hydroponic growing system in a small greenhouse on site at the brewery, located in the city of Landskrona.

The hydroponic system uses no soil; instead the hops are planted directly in clay balls, which are nourished by nutrient rich water. For comparison, the researchers have built a drip irrigation plant-box system, where the hops are grown in soil. Both systems are a part of the controlled environment of the greenhouse, which integrates waste heat and carbon dioxide from the on-site beer production.

– The goal is to compare these two systems over time and to test whether it is possible and better to both grow hops inside, hydroponically, and to grow them year-round, with the characteristics and consistency brewers are looking for in their hops, says Barry Ness.

Sustainability advantages - from the local to the global

Growing hops hyperlocally has many advantages, especially from a sustainability perspective, emphasize the researchers.

– You avoid emissions associated with the long transportation of hops; furthermore, with the controlled environment, you have a better resistance to climate variability, and create an ability to produce hops year-round, all in one system. Such a technique can also support local job creation, foster community engagement, and contribute to a circular economy in the region, says Barry Ness.

– Long-term, we want to see if this is something that can be upscaled commercially. Another aim is to see how we can share what we learned from this very local initiative with project partners in different countries in ways that are meaningful for their local contexts, concludes Darin Wahl.

What is an Urban Living Lab?

An Urban Living Lab (ULL) is a methodological approach to developing locally relevant and implementable solutions to real world sustainability problems. The ULL is transdisciplinary, meaning that researchers partner with societal actors to collaboratively design the project, and by working together throughout the process, to produce knowledge, learning, and pathways toward sustainability. At the core of an ULL is one or more experiments which test potential solutions in semi-protected spaces. The experiments aim to reveal the feasibility and viability of implementing different solution options.

Darin Wahl and Barry Ness are also working with the craft beer sector to co-create a set of sustainability principles for the regional industry. The collaborative work has been on-going since 2017.

The aim is to increase the dialog on sustainability in the regional sector and can be used as a basis for discussion and adoption by the craft beer industry in Sweden and internationally, says Barry Ness.

Barry Ness is Associate Professor at Lund University Centre for Sustainability Studies. He is a researcher and work package leader for the Globally and Locally-sustainable Food-Water-Energy Innovation in Urban Living Labs (GLOCULL) project. Barry is also a project researcher in the TRANSFORM project.

Darin Wahl is a PhD candidate at the Lund University Centre for Sustainability Studies. His PhD research is part of the GLOCULL project.

The collaboration with Brygghuset Finn is undertaken as part of the international research project, GLOCULL, which aims to develop, physically implement and test novel solutions to sustainability challenges within the food, water, and energy (FWE) nexus.

To support future implementation of this approach, guidelines and a participatory assessment toolkit will be developed through co-creation in seven Urban Living Labs based on an integrated assessment of local-global interactions in the FWE nexus and transdisciplinary action-research.

LUCSUS researchers are developing an Urban Living Lab approach to adress sustainability in the food, water, energy nexus through the case of craft beer sector in Sweden (Scania).
More news